Julie Weber is the Chief Marketing Officer and Principal at Brllnt, a creative and digital strategy marketing agency. Originally from Kentucky, Julie previously led the marketing and communications efforts at Scoop News Group and at the Washington, DC Economic Partnership – including launching the development of the #WeDC campaign at SXSW.

WWPR’s Molly Mitchell spoke with Julie for the November edition of Power Points about how she keeps her creative juices flowing and why triple checking your work is always the best policy.

What drew you to PR?

I’ve been writing stories for as long as I can remember – I first scribbled in crayon along my childhood home in Kentucky to becoming a journalist in my very early 20s. It’s a deep passion of mine. Professionally, writing for magazines felt too small for me. I wanted to think bigger picture – beyond the byline box. Creative marketing and PR called to me. Being able to figure out how to build a relationship between an audience and brand with stories that resonate? I love doing that.

How would you describe your current role (elevator sentence style)?

As the Chief Marketing Officer at Brllnt – I provide guidance to our clients on how to position themselves to meet whatever business goals they have set – whether it’s financial or brand awareness or, both. When an organization brings on a marketing agency – they are bringing on a team of business market experts. It’s one thing to build something, but it’s another to understand the market, what they pay attention too, and what language they speak in. I get to build strategies that address each of these and then help our team execute it. 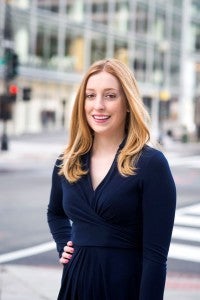 Is there such a thing as a typical day for you in your current role? If yes, what does it look like?

In the marketing and PR world, I don’t think there is such a thing as ‘typical’ day. If you have those, you become tapped of creative energy. I try to get out from behind the computer as much as possible – spend more time interacting with people and the environment around me as possible. But there are staples: three alarms to get me out of bed, loads of coffee before noon, a walk to Glen’s Market for lunch, hot tea in the afternoon, and as much laughter as I can muster.

What is the most difficult and most gratifying part of your job?

When someone hires an attorney or an accountant, they rarely question their authority on that subject matter.  In creative marketing and PR, everyone’s an ‘expert.’ That can be the toughest. What we study as experts in marketing is not just the tools of how to execute a message but how to get people to respond in the less-than-a-second window we get of their attention. People often use their own behavior as justification on their perspective of marketing and communications. What they don’t usually realize is how much was served to them before they actually made the decision to act upon an ad, a story, or a social post. And because no one is aware of it — there is a ton of education built into the work we do.

The most gratifying part is when I get the freedom to build something big, bold, and unconventional that gets incredible results. I love being able to do that.

What keeps you motivated?

My passion of building creative communications strategies. I am thinking and strategizing in my brain all the time.

You’re active on Twitter and Instagram – what’s your advice on how to have an authentic and fun voice online?

If you went to a party, and stood in the center of the room, and just talked about yourself, less people will chat with you. But, if you engage, listen, ask questions, and talk about commonalities of things you love with other people – there can be immediate friendship. The same goes for social media.

What professional experience have you learned the most from?

I learned early on the importance of paying attention. I ordered 12,000 water bottles for an international campaign for a huge client that was launching in 2 weeks. When the water bottles showed up, the red PMS color I provided was now a hot pink. Turns out, I switched 2 of the PMS numbers. My lesson: take the time to triple check your work. It will feel redundant, but so much quicker than the time it will take to recover from a catastrophic mistake that boiled down to 2 tiny numbers.

Tell me more about the #WeDC campaign and your experience at SXSW. What did you learn from that experience?

WeDC was a huge turning point in my career.  I had just emerged from agency world where I was always a part of a creative team. It was the first time that I was operating without a cushion and I was terrified. But, I also had the freedom to take risks and challenge convention. There wasn’t anyone to point out everything that could go wrong. I took a tiny, grassroots campaign with hardly any budget and turned it into one of the best digital marketing campaigns at SXSW 2016. It not only garnered 61.5 million impressions, of which 80% was organic, but it got more than 10K in direct engagement and beat out top SXSW tech brands like Google and SnapChat as well as sponsors.

What do you think is the biggest barrier to female leadership in the workplace?

To be honest, the most challenging work environments I have worked in are ones that are led by other women. While we are still overcoming the challenge to become equal with our male peers, we are still beating each other down instead of supporting, guiding, and mentoring each other. I mentor other women in my industry because I want to them to be the best they can be, even if that means they are better than me. We need to challenge, empower, promote and raise the pay of the women working around and for us.

What makes a successful communications campaign (basically how do you measure that you’ve done a great job)?

Were you trying to gain brand awareness? Were you trying to generate leads for your products? Did you successfully achieve the milestones you set? If yes, then that is success. If not, revisit what isn’t working and tweak from there.

When you hire what are the qualities you most value in potential employees?

Hands down, the ability to take initiative, be accountable, and when you aren’t sure about something, the ability to ask questions and figure it out. I can train and teach many things but I can’t instill this. In the communications field where everything moves at a lightening pace and the field is ever-changing. I can’t afford to bring on folks who aren’t willing to carry their own weight and prove themselves.

What’s your favorite thing about the District?

The bike paths, the free museums and the diversity of people and perspectives.

What do you ‘gram the most of?

I’m obsessed with trees. They are majestic, wise, and serve as a daily reminder that even when you are standing still – you never need to be the same tree you were the day before.

What are three things that every professional woman should keep in her bag?

A pencil. A notebook. A business card. You never know when you need to write down a good idea or who you are going to meet – be prepared for both.

Morini in Yards Park. They have amazing Italian food, but they serve up the most EPIC desserts. This city doesn’t do great desserts — but they are killing it at Morini.

What outfit combination do you consider your power suit?

A tie blouse, flare skirt, and blazer with booties. It’s stylish, flattering, and jazzes up the old suit and tie go-to.

And finally what advice would you give your early professional self?

That I am good enough.