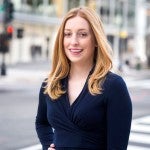 Molly Mitchell is a communications associate at Scott Circle and member of WWPR.

Emily Lenzner is the Senior Vice President of Communications at Atlantic Media where she oversees public relations for media brands including The Atlantic, National Journal, Government Executive Media Group, and Quartz. The DC native took time out of her busy schedule to talk about everything from the rapidly changing media landscape to paddle boarding on the Potomac for exercise.

WWPR’s Molly Mitchell sat down with Emily for the June edition of Power Points to learn more about what it’s like to lead communications for a media group.

MM: You have had an extremely varied career. You’ve worked in media, political, non-profit and entertainment industries. Was that planned? 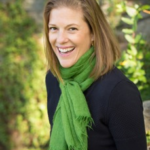 EL: Not at all! Nothing in my career has been planned except that I always had the intention of going into media. I studied English in college but I really was interested in photojournalism — that passion lead to my first job post college working as a photographer for a weekly newspaper on Nantucket Island.

MM: And then eventually you did get into the TV news business first in local news and then later on as the Executive Director of Communications for ABC News at the DC Bureau. What drew you specifically to public relations for a media organization?

EL: When I was working in newsrooms early on I recognized my appreciation for journalists and the work they do. So having worked in a newsroom, I thought that type of PR that would be the most inspiring and fun for me.

MM: Let’s fast forward to the present—how would you describe your current role as SVP of Atlantic Media?

EL: I manage the public relations and communications for all of Atlantic Media’s brands [which include The Atlantic, National Journal, Quartz and Government Executive Media Group].

MM: What keeps you motivated?

EL: That I love my job! It’s always different and it’s not redundant. There are constantly new challenges and things to learn. If I wasn’t learning, I wouldn’t be satisfied.

MM: How do you measure the effectiveness of a communications campaign?

EL: Public relations can’t always be measured with financial stats but brand recognition is crucial. For example the April Atlantic cover story was “The Obama Doctrine” by Jeffrey Goldberg. That piece was extraordinary – it has generated conversations among world leaders and anyone who has a stake or interest in foreign policy. We worked really hard to come up with a strategy that would flood all media avenues. And I know that without question, everyone who knows the piece knows that the article came from The Atlantic. Seeing the magazine splashed all over cable news and all the likes and shares on Twitter and Facebook – that exposure matters. To me that shows success.

MM: What would you say is the most difficult part of your job?

EL: That the media landscape is changing daily. To be successful you have to always be adaptable and anticipating what’s next. Now that includes embracing social media platforms to distribute your content in all business models.

MM: What about the most gratifying?

EL: I get to work with some of the most talented and smartest journalists and media professionals in the business. It’s also great to work with a media company in this day and age that’s growing.

MM: Being a board member on the non-partisan nonprofit Running Start, what do you believe is the biggest barrier to female leadership?

EL: I think it’s a combination of things. One thing I do believe in is the idea of an unconscious bias where men and women both tend to unconsciously — not across the board but in some cases — prefer male candidates. That said I think the other issue women face, which we deal with at Running Start, is when they think about running for office or leadership roles they feel that they need to over prove their value, and really prepare themselves, while men often don’t feel that way.

MM: As a DC native what’s your favorite thing about the city?

EL: The culture — especially the opportunity to experience culture at no costs with the incredible Smithsonian museums.

EL: I love to paddle board on the Potomac. It’s one of my favorite things to do. When you work in media and politics in Washington your world can be stressful and your job is your life. So whenever I can, I love to get out on the water for about an hour. It’s great exercise!

MM: What do you do first thing in the morning?

EL: I pick up my phone and scan the headlines for around 20 minutes to get a head start on what’s going on in the world.

MM: What are three things that every professional woman should keep in her bag?

EL: A mophie [charger for your cell], business cards and my emergency mini pouch that has everything I need: lip gloss, Band-Aids, Advil, hair ties and perfume.

EL: My all time favorite is The Tabard Inn. It’s been around my whole life and it’s consistently good. I love the ambiance year round. It’s cozy in the winter and nice in the summer on the patio

MM: Your go to coffee order?

EL: Used to be a double tall skim latte, now I try not to drink coffee so it’s often an English breakfast tea with milk and honey.

MM: Finally what advice would you give your early twenties self?

EL: I wish I had known how young I actually was and how much life there was left still to experience. Don’t stress because life is long. You change so much in your twenties so give yourself a break. But do take opportunities when they’re presented, don’t take yourself so seriously and always have a sense of humor.

To learn more about Atlantic Media check out: http://www.atlanticmedia.com/about/
Follow Emily and Molly on Twitter: @elenzner and @mollyemitchell