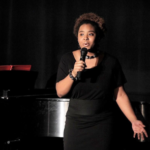 The learning experiences that many young performers and artists gain at Sitar Arts Center have been such a strong influencer that several Sitar graduates have formed the Sitar Alumni Actors Theater Company. The new alumni theater troupe will present its first production, A Raisin in the Sun in February as part of Sitar’s celebration of Black History Month.

“It’s a classic play and perfect for Black History Month,” says Christina Lucas, who will play Lena Younger (Mama) in the production.

Christina was introduced to Sitar after graduating high school from the District’s Duke Ellington School of the Arts. A classical vocal performance major, Christina who is now 22, explains that she wanted to gain more experience performing on stage in a musical theater setting. Through DC’s Summer Youth Employment Program, Christina was partnered with Sitar for an internship that included working on a production of The Wiz. Christina played several on-stage roles, including an Emerald City citizen and Aunt Em.

“It was crazy and I loved it,” she says.

Since that summer five years ago, Christina has returned each year to Sitar: as a student, as a volunteer, and as a teacher. She’s coached a singing group of 5-to-8-year-old students, painted backdrops, and designed props for Sitar theater productions. Christina also took advantage of the wide array of classes offered at Sitar. The pride in her voice comes through when she recalls a pottery class she took. “I still have the pieces, the cups and plates, to this day that I made,” she shares.

The openness of the Sitar community has had the biggest impact. At Sitar, Christina says, she feels “very comfortable expressing myself. And, I don’t feel that in a lot of places.” Her experiences there have shaped her personal and musical growth. Instead of thinking that a song must be sung in a specific way, the Sitar teachers have helped her convey emotion and provided the freedom to grow beyond the boundaries she learned through her roots in classical music. Christina says she learned not only to focus on posture or hitting a specific note, but that other types of musical performance, including Broadway and jazz, allowed for more expression. “My individual creativity as a singer wasn’t fully developed until I worked at Sitar,” she says.

“I’m now open to try new things. I was scared at first,” she admits. The teachers, especially Ms. Lorraine, Sitar’s senior director of programs and a nationally-recognized arts educator, inspire everyone to make a scene come alive. “Once I’ve put a costume on, I now move from someone who just says her lines to really understanding the character, and how they think and how they walk.”

Christina is especially looking forward to performing in A Raisin in the Sun. Relating to Lena Younger, a woman from another era and from a different generation, makes the role complex for her. Lena is the mama and in the 1950s, when the play takes place, it traditionally is the matriarch who serves as the foundation and holds the family together. But Christina says she believes that in this story, it is the daughter-in-law Ruth Younger who takes on that role. Mama doesn’t understand her son’s unhappiness and doesn’t know how to fix it, says Christina. “As a younger person, I can’t always relate to Mama’s feelings.” Christina adds that some of these issues – especially about characters understanding each other – haven’t changed over the years, and that she sees similar generational issues in her own family.

To prepare to play Mama, Christina says she has drawn on “different experiences from my relationship with my own grandmother and my mother. The role has also made me think about what it is like to be a mother to an adult, and not just a mother to a young child.”

Sitar also influenced Christina’s career path. A former student at Temple University, Christina switched her field of studies from vocal performance to musical education, with a concentration in voice. One day, after returning to school and completing her studies, she hopes to open her own arts center. For now, Christina is working and focused on gaining knowledge to build an organization from the ground up.

Her enthusiasm for Sitar is contagious. Attend one of Sitar’s performances and “you can feel the sense of community and positivity.” She adds: “You enter and you feel so welcomed, you feel just great.”

The Sitar Alumni Actors Theater Company will present A Raisin in the Sun on February 8 and 9 at 7 p.m. Performances will take place in Sitar’s deLaski Theater, 1700 Kalorama Rd., NW.  Proceeds from ticket sales will help all families have access to arts education opportunities.

General admission tickets for the February 8 and 9 performances are available https://www.eventbrite.com/e/a-raisin-in-the-sun-play-tickets-54370260914.