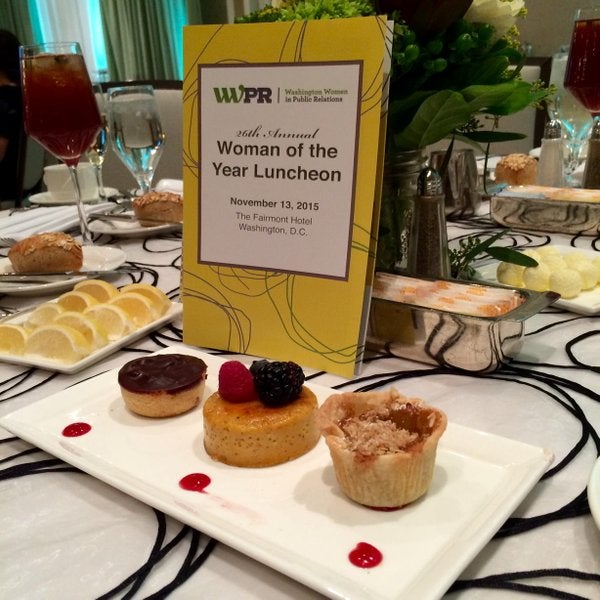 Nicols was one of three public relations professionals chosen as an honoree for the 26th annual award. The other finalists were Carrie Fox, president of C. Fox Communications, and Lisa Throckmorton, chief operations officer at SpeakerBox Communications. The three finalists represent women who have led some of the most influential communications campaigns in the District and across the country.

“This is a phenomenal honor and I am humbled to be surrounded by such exemplary leaders in the field who are dedicated to mentoring and supporting the next generation of public relations professionals,” said Nicols. “It is a special privilege to join the ranks of previous PR Woman of the Year recipients including Hager Sharp’s own cofounders Susan Hager and Marcia Sharp, as well as our CEO Jennifer Wayman and executive vice president Debra Silimeo.”

Nicols was presented the award by Silimeo, the 2010 PR Woman of the Year, at Friday’s luncheon.

WWPR, a professional society advancing women communicators in metropolitan Washington, established the Woman of the Year Award in 1990 to honor the most talented women in the public relations profession. This year’s luncheon was held at the Fairmont Hotel in Washington, D.C., and featured keynote speaker Kelly M. Parisi, vice president of communications and marketing at Lean In and alumna of The George Washington University. “I am thrilled to return to Washington for the opportunity to recognize these courageous women who are vivid examples of what it means to lean in—Carrie Fox, Christina Nicols, and Lisa Throckmorton,” said Parisi. “Thank you, WWPR, for inviting me to be part of this beautiful event and filling the room with women I consider to be peers, role models, and friends.”

Parisi’s remarks centered on bravery as she applauded all three women for their courage, ingenuity, and passion and reminded the audience that it would take a billion acts of bravery to create greater equality in the world.

“Christina Nicols embodies all the exceptional characteristics of a WWPR Washington PR Woman of the Year,” said WWPR President, Avelyn Austin. “Each year we are overwhelmed by the exceptional group of nominees and finalists. This year, we are so pleased to showcase the remarkable accomplishments of Christina Nicols, Carrie Fox, and Lisa Throckmorton.”

Special thanks goes to WWPR annual and event sponsors, raffle contributors, and in-kind donors for their generous support of the event and organization.

About the Washington PR Women of the Year Selection Process

Each year, candidates are nominated through an open application process. The applications are then reviewed and evaluated based on standard criteria, which include: accomplishments in the public relations field; contributions to the community; and industry leadership. The final selection is made by a panel of esteemed communications professionals based in the Washington, D.C. area. The judging panel included WWPR President Avelyn Austin; WWPR Vice President Mara Vandlik; Susan Apgood, News Generation; Laura Lawson-Zilai, Goodwill Industries; Emily Rasowsky, Social Driver; Kris Tremaine, ICF Corporation; and WWPR’s Past President, Lauren Smith Dyer.

About Washington Women in Public Relations

Washington Women in Public Relations (WWPR) is a member-based professional society cultivating and inspiring female communicators to reach their full potential in the D.C. market and beyond. The organization is committed to providing leadership opportunities, professional development, mentorship, and industry networking. Find out more at www.wwpr.org, “Like” us on Facebook.com/WashingtonWomeninPR, join our group on LinkedIn, and follow us on Twitter @WWPR and Instagram @WWPRDC.